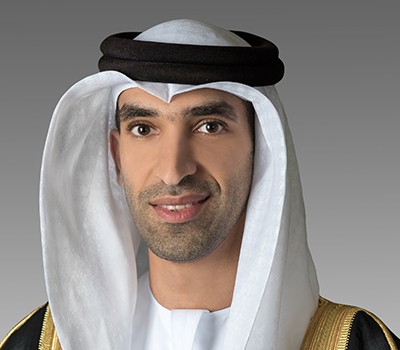 Minister of State for Foreign Trade

H.E Dr. Thani bin Ahmed Al Zeyoudi was appointed the UAE Minister of State for Foreign Trade, following the new UAE Government structure in July 2020, and has been assigned a file to attract the best talents and competencies to serve the strategic direction of the UAE. H.E. also oversees the development of non-oil foreign trade sectors and the expansion of global partnerships, in addition to enhancing the investment climate in the country, in order to cement its position as a major business destination at the regional and global levels.

H.E. had held the position of Minister of Climate Change and Environment previously, during which he supervised the implementation of the UAEs strategies locally, advancing environment and climate actions. He also led the country&rsquos efforts in limiting and adapting to the repercussions of climate change at the global level, while also focusing on the preservation of the UAE&rsquos biodiversity through the development and implementation of a set of effective policies and measures.

Prior to assuming his ministerial position, H.E Al Zeyoudi served as the permanent representative of the UAE to the International Renewable Energy Agency IRENA, and Director of the Department of Energy Affairs and Climate Change at the Ministry of Foreign Affairs and International Cooperation.

H. E. began his career as a petroleum engineer at the Abu Dhabi Marine Area Operating Company ADMA-OPCO before moving to the Abu Dhabi Future Energy Company Masdar, where he worked on the development of renewable energy technologies and solutions. He has played a major role in the UAE&rsquos successful diplomatic campaign in 2009 to host the headquarters of the International Renewable Energy Agency IRENA in the capital, Abu Dhabi.