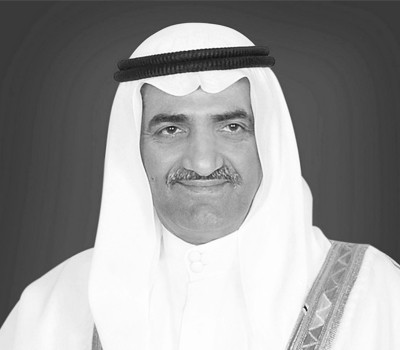 Sheikh Hamad bin Mohammad Al Sharqi was born on 25th September 1984 in the Emirate of Fujairah. He received his primary education at Al-Sabahiya School, the first regular school established in Fujairah, then joined London College in the United Kingdom in 1967 to complete his higher studies. Later, he studied at Mons Officer Cadet School, then at the Royal Military Academy Sandhurst RMAS.

H.H. held many roles among which are Chief of Police and Security in Fujairah, Minister of Agriculture and Fisheries in the Unions first Cabinet formation of the UAE Federal Government, on 9th December, 1971, and Crown Prince of Fujairah.

After the passing away of his father, Sheikh Mohammad bin Hamad bin Abdullah Al Sharqi, in 1974, Sheikh Hamad bin Mohammad Al Sharqi became the Ruler of the Emirate of Fujairah. H.H. was keen to follow his fathers steps in developing the Emirate in all fields, turning it into a destination of choice for Arab and foreign tourists and investors.

Fujairah witnessed vast economic activity in the 1960s and 1970s, including opening several banks that helped catalyze the commercial growth in the emirate. In 1987, His Highness issued an Emiri Decree to establish the Fujairah Free Zone as an independent government authority, with the aim of promoting economic activity in Fujairah, attracting foreign investments, and increasing the Emirates GDP.

H.H. further issued an Emiri Decree to establish the Fujairah Petroleum Industries Zone FOIZ in April, 2011. Since its establishment, FOIZ has enhanced navigation, the oil sector, oil and gas industries, and the establishment of oil-related economic and logistics projects. Today, Fujairah Port is the second largest bunkering hub in the world. The Ruler of Fujairah also supported the tourism sector by establishing tourism offices and government departments to promote Fujairahs position on the global tourism landscape.

Education has always been a priority for H.H. Sheikh Hamad bin Mohammed Al Sharqi. His Highness used to visit the schools in the Emirate and meet students and teachers, find out their needs, listen to their future aspirations, visit art exhibitions organized by schools, and honor outstanding students to encourage them to continue their efforts and reach advanced academic levels.

Following the directives of His Highness Sheikh Hamad, Fujairah National Theater was established on 4th June 2005 with its headquarters in the Fujairah Society for Culture and Arts. The theatre sector flourished through the local, Gulf and Arab performances that were held on the Fujairah Theater.

In the field of media development, His Highness officially inaugurated the radio broadcast of Fujairah Radio on 15th June, 2006, broadcasting to all parts of the world. In September 2009, the Zayed Radio for Holy Quran was officially launched from Fujairah. In 1990, His Highness ordered the establishment of the Fujairah Social and Cultural Association to be a cultural beacon that fosters literary and intellectual movement through various activities and events. On 3rd December, 2006, H.H. Sheikh Hamad issued an Emiri Decree establishing the Fujairah Culture and Media Authority with the aim of achieving comprehensive media and cultural progress in Fujairah and enhance its position in the cultural field.